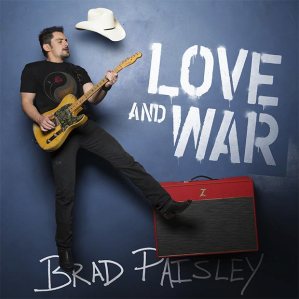 Nashville, TN – Country superstar Brad Paisley announced today the track listing of his forthcoming Arista Nashville album, LOVE AND WAR, which streets April 21. Fans can download or stream the first single “Today” HERE which is Top 10 in Canada and Top 5 in the U.S.

The credits for Paisley’s 11th studio release are as follows:

2. “Last Time for Everything”

Brad Paisley is a critically acclaimed singer, songwriter, guitarist and entertainer whose talents have earned him numerous awards, including three GRAMMYs, two American Music Awards, 14 Academy of Country Music Awards and 14 Country Music Association Awards (including Entertainer of the Year), among many others. He has been a proud member of the Grand Ole Opry since 2001. Paisley has written 20 of his 23 #1 hits including “He Didn’t Have to Be,” “Mud on the Tires,” “She’s Everything,” “Water” and “Remind Me,” among others.  His highly successful Life Amplified World Tour 2016 traveled across the US and Canada and continued through February 2017. His current single, “Today,” is resonating with people around the globe and is currently in the Top 10 in Canada, Top 5 in the U.S. on the country single charts and the music video has been viewed over 30 million times. Paisley has partnered with Boot Barn® and developed an exclusive line of jeans, hats, T-shirts, jewelry, belts and woven shirts called Moonshine Spirit by Brad Paisley. Connect with Brad at www.BradPaisley.com, www.Facebook.com/BradPaisley, on Twitter @BradPaisley, on Instagram @Brad Paisley, and YouTube at YouTube.com/BradPaisley.