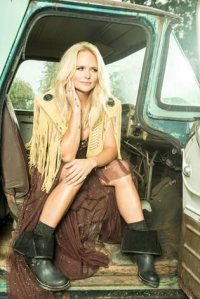 Nashville, TN – Vanner Records/RCA Records Nashville GRAMMY® Award-winner Miranda Lambert receives SIX nominations for the 52nd Academy of Country Music Awards (ACMs) including ALBUM OF THE YEAR for The Weight of These Wings. This nomination marks Lamberts FIFTH consecutive album to be recognized in the ACM Album of the Year Category. Within the Album of the Year category, Lambert holds the record for most ALBUM wins, by an artist, in ACM History.

Lambert follows the smash hit of “Vice” with her newest single from The Weight Of These Wings, “We Should Be Friends.” Lambert recently released the effervescent music video for “We Should Be Friends” in which she stars alongside her real-life best friends and co-writers, Natalie Hemby & Waylon Payne. Watch Lambert and friends’ beauty parlor festivities in the music video here.

Carrying The Weight of These Wings to fans, Lambert continues on her cross-country HIGHWAY VAGABOND tour with upcoming stops in Reading, Penn., Charlottesville, Wash., Charleston, SC.

About Miranda Lambert: Vanner Records/RCA Records Nashville singer/songwriter Miranda Lambert is the reigning ACM Female Vocalist of the Year, having been bestowed this honor for seven consecutive years. Her accolades include 2 GRAMMY®Awards, 13 (CMA) Country Music Associations Awards, and 25 (ACM) Academy of Country Music Awards as well as many other honors, including the prestigious Harmony Award from the Nashville Symphony.

The Texas native released her most recent effort, a double album titled The Weight of These Wings in November 2016, which debuted at No. 1 on the Billboard Country Albums chart. She touts six studio albums to her repertoire; Kerosene (2005), Crazy Ex-Girlfriend (2007), Revolution (2009), Four The Record (2011) and Platinum (2014), the latter earning Lambert a GRAMMY® Award for Best Country Album, in addition to her previous GRAMMY® win for Best Female Country Vocal Performance in 2010 for “The House That Built Me.”  The first song released from The Weight Of These Wings, “Vice,” is nominated for 2 GRAMMY® Awards. Her second single, “We Should Be Friends”, is chasing up the charts at Country Radio. www.Mirandalambert.com