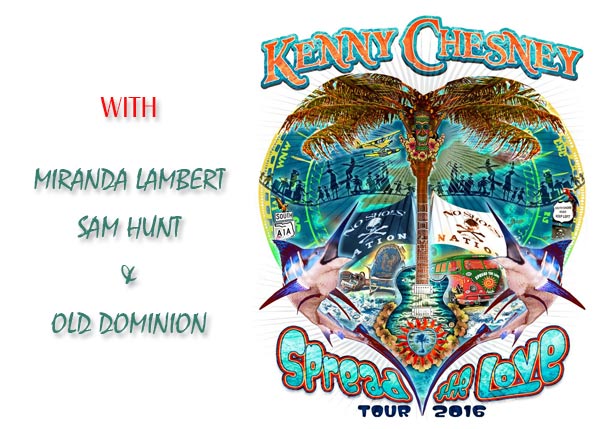 Nashville, Tenn ( Nov. 4, 2015) – With 11 stadiums already on the books for Kenny Chesney’s 2016 Spread the Love Tour, the 8-time Entertainer of the Year is already announcing an addition to that line-up. On Saturday, May 28, Chesney will hit Louisville’s Papa John’s Cardinal Stadium for an all day celebration of fun, friends and music.

“You don’t wanna overdo the stadium thing to where it’s not special,” Chesney says of the latest addition to next year’s schedule. “But being outside in Louisville is one of those places where the music hits the night, and it’s not the same as being inside. As we’re looking at the routings and our history, I’m really glad we’re gonna be playing Cardinal Stadium ‘cause as great as the Yum! Center was, I think we’re gonna top that show!” 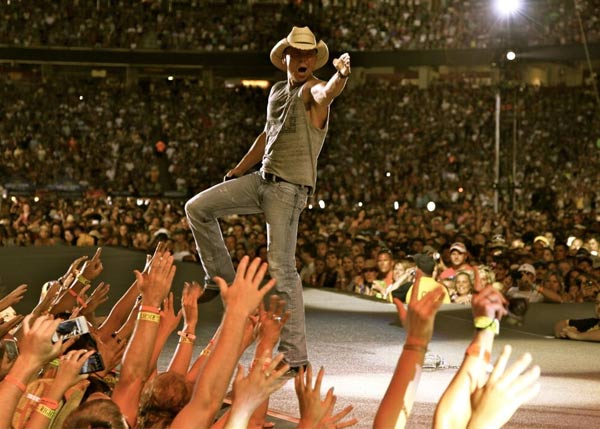 Having broken nine attendance records – many his own – and selling in excess of 1.3 million tickets on The Big Revival Tour, the man The Wall Street Journal called “The King of the Road” is serious about amping up the energy of last year’s audiences. Kicking off Spread the Love with April 23’s concert at Auburn’s Jordan-Hare Stadium, this is going to be a summer that takes no prisoners in terms of how he hits that stage.

“Last year, we stripped things back and we really learned how to push the energy between us and the crowd,” Chesney says of his focus coming into this year. “So getting ready for this year, we’re gonna keep the music a big part of it, and how the fans lean into those songs – the singing, cheering, dancing – so it’s all about that! When you see Miranda (Lambert), Sam (Hunt) and Old Dominion – you know those are all people who take connecting with the audience through their songs as seriously as I do.”

Still more stadiums will be announced. For now, though, it’s a dozen stadiums and counting for the songwriter from East Tennessee who so many set their summers by. Called “Two parts Mick Jagger, one part Bruce Springsteen and one part Billy Graham” by the Dallas Morning News this summer, Chesney is all about the live connection that music makes between people – and the further he can push the energy and the memory-making, the happier he is about being out on the road.

“Let’s face it,” he says, “we all have those songs that mark or define our lives. Those songs are literally the soundtrack of our memories, and the only thing better than having those songs is sharing them with friends. Since we started hitting the road as headliner, people have made our shows the meet-up point for friends, for family and even for people they’ve met in our parking lots over the years. I’ve seen people come back summer-after-summer, get engaged, get married, have kids and really come into their own.

“Those stadium shows really bring that home, and there’s nothing like them.”

Chesney is the only country artist on Billboard’s Top 10 Touring Acts of the Last 25 Years – in spite of only being a headliner for the last dozen. With Spread the Love, he’s planning to take it up a notch, and now Louisville’s part of Chesney’s summer 2016.

& MORE TO BE ANNOUNCED…