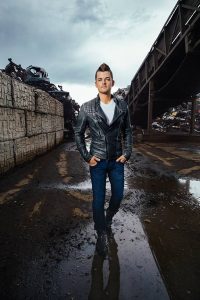 NASHVILLE, TN — RED BOW Records’ Chase Bryant will headline the inaugural “Music For Mobility” concert in an effort to raise money for The Arthritis Foundation. The first of what will become an annual benefit, the all ages concert will take place beginning at 7 pm on Sunday, November 22nd at Nashville’s The Listening Room.

Raising awareness and monies for arthritis treatment research is a cause deeply personal to the rising star. In fact, two of Bryant’s close family members suffer from debilitating arthritis.

“A lot of people don’t realize just how painful arthritis is and that it also affects young children. My cousin Emma has suffered from juvenile rheumatoid arthritis since she was two years old. She’s already had a number of surgeries and treatments because of the disease. My aunt Jenifer also suffers from arthritis. This is personal for me. My hope is to raise money for research to discover more effective treatments and – ultimately a cure — for the disease,” says Bryant.

More than 50 million people in the U.S. – including 300,000 children – suffer from arthritis, making it the #1 cause of disability in America.

Additional famous faces from the Music City songwriting and artist community will join Bryant on stage to raise money for The Arthritis Foundation. The full performer line-up will be announced soon.

General Admission tickets are $15 in advance. A limited number of VIP tickets are available for $45. Each VIP ticket includes preferred seating, a meet n’ greet with Chase Bryant after the show and an autographed poster.  VIP Table Packages are also available for $500 per table. VIP Table Packages include a table for four in the front row, four meet n’ greet passes for after the show, four autographed posters and one autographed guitar.

All ticket packages are available now at:  https://www.eventbrite.com/e/music-for-mobility-concert-tickets-19275335046

Bryant’s guitar-wielding Top 10 debut single “Take It On Back” has reached THREE MILLION combined views on YouTube/ VEVO, spent 15 consecutive weeks on the CMT Hot 20 Countdown, seven weeks to-date on the GAC Top 20 Country Countdown, and was a Top 20 Most Watched Video on VEVO TV Nashville. Internationally, the single was a Top 20 hit in Canada and earned the #1 spot on Australia’s CMC Countdown. Hot off of Tim McGraw’s 2015 Shotgun Rider Tour, Bryant has scored his second consecutive hit – the critically lauded “Little Bit of You” – which continues to ascend the Country single charts. Bryant’s debut EP, which he co-produced alongside Derek George (Randy Houser), is available at digital retailers now. Buy it here: http://geni.us/ChaseBryantEP

ABOUT THE ARTHRITIS FOUNDATION:
The Arthritis Foundation is the Champion of Yes. Leading the fight for the arthritis community, the Foundation helps conquer everyday battles through life-changing information and resources, access to optimal care, advancements in science and community connections. The Arthritis Foundation’s goal is to chart a winning course, guiding families in developing personalized plans for living a full life – and making each day another stride towards a cure. The Foundation also publishes Arthritis Today, the award-winning magazine that reaches 4.2 million readers.