“What an awesome, inspiring experience,” said The Oak Ridge Boys’ tenor Joe Bonsall about hanging backstage with just Taylor and her family.

“This was the most amazing show I have ever seen… When I wasn’t thinking about it all night, I was dreaming about it!” added Duane Allen. 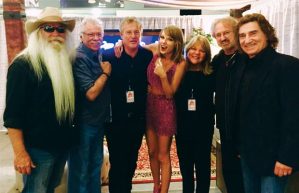 Taylor’s father recounted seeing The Oak Ridge Boys and Kenny Rogers at a show in Hershey, PA in 1979. He described how impressed he was with how they fired up the crowd.

“They were extremely kind. We talked as friends, neighbors and business colleagues with mutual admiration,” expressed Bonsall.

The Oak Ridge Boys will be inducted into the legendary Country Music Hall of Fame, the genre’s highest honor, on Sunday, October 25.

For more information on The Oak Ridge Boys including upcoming tour dates as part of their Christmas Night Out tour, please visit www.oakridgeboys.com.