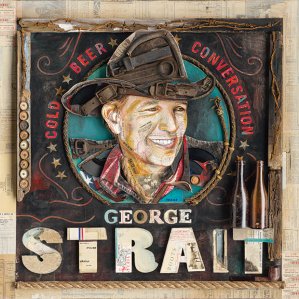 Album sales remain strong with more than 100,000 in sales and counting as critics continue to hail the “King of Country Music’s” latest project

NASHVILLE, Tenn. (Oct. 12, 2015) – George Strait is riding high at the top of Soundscan and Billboard’s country albums charts this week, powering into the No. 1 position on both with his latest MCA Nashville release, Cold Beer Conversation. The album – Strait’s 29th studio album and 26th to top the country charts – has sold more than 112,000 copies to date and been hailed by critics as “classic, by-the-book George Strait . . . the best effort from a mainstream male artist that country music has seen, well, since the last George Strait album” (Dallas Observer) and “another gem to one of country music’s deepest, most entertaining catalogs” (Associated Press). The New York Times notes that Cold Beer Conversation “finds Mr. Strait at his most pulpy and resonant.”

Strait’s new music has resonated not only with fans, but also with the “King of Country Music” himself as he prepares to launch an exclusive concert series at the Las Vegas Arena opening in April 2016. All six dates for his “Strait to Vegas” run are currently sold out, with more shows to be added to accommodate the overwhelming demand. GRAMMY, ACM and CMA Award-winning singer/songwriter Kacey Musgraves will join Strait as support on all dates.

With 60 No. 1 singles and nearly 70 million records sold, Strait has more No. 1 songs than any other artist and is third only to Elvis Presley and The Beatles with the most Gold and Platinum albums in history. He is the most-nominated artist in CMA Awards history and was the first country music artist honored with Billboard’s “Legend Of Live” Award.

Cold Beer Conversation is available now at Apple Music and Walmart. For more information on “Strait to Vegas” dates and more, visit www.georgestrait.com or www.straittovegas.com.