My Kid Brother’s Band aka The Beatles

“…Harrison has an unusual angle for her Beatlemaniac memoirs:
she was living in America when her brother hit it big…” – Rolling Stone

SAN DIEGO, Ca. (June 3, 2015) – By the summer of 1965, Beatlemania had gripped the world, with fandom reaching the highest pinnacles of society. The Beatles had played for presidents, heads of state, and accepted a command performance from Queen Elizabeth II. So great was the Fab Four’s rising fame that, in June of 1965, they were named Members of the British Empire–a high honor for four kids from Liverpool. Now, on the cusp of the 50th Anniversary of their MBE induction, one person close to them is looking back at Beatlemania.

For Louise Harrison, Beatles success meant something different entirely. Living in the United States, Louise had been a vanguard of the Beatles, and she worked hard to help make the band as big a success in America as they had been across the pond–her efforts often and humorously met with rejection. But behind the fame and away from the lights, Louise and her mother and father provided something to the other three Beatles that only the Harrisons could: a family. Now, for the first time, Louise has lifted the veil on life with the Beatles in a heart-felt, powerful memoir My Kid Brother’s Band: a.k.a. The Beatles! (Acclaim Press, 2014)

Recounting the rise from Liverpool, sweeping British and European popularity, and that fateful first broadcast on The Ed Sullivan Show. Louise takes readers on a journey through the years, touching on emotional, spiritual, and professional landmarks along the way. With so many Beatles “50th anniversaries” on the calendar this year, Beatles fans everywhere won’t want to miss this intimate portrait of life inside one Beatles family. 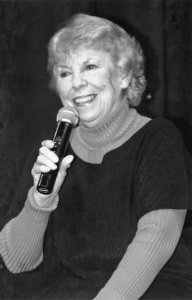 ABOUT LOUISE HARRISON
Louise Harrison was born in Liverpool, England, the first child and only daughter of Harold and Louise Harrison. Her youngest brother, George, was also the youngest of the four Liverpool lads know as The Beatles. During 1964 and 1965 Louise, living in Illinois, found herself writing and broadcasting daily Beatles reports nationwide, due to public demand for news of The Beatles. Her distinctive voice with its British accent is immediately recognized by Beatles People all over the world.