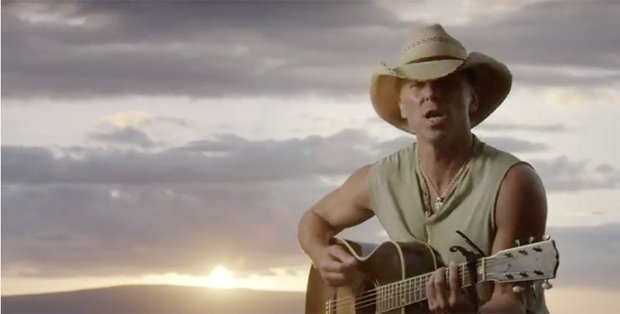 NASHVILLE, Tenn. (May 13, 2015) — Kenny Chesney has always sought to push the video envelope in country music, but never more so than for The Big Revival. When CMT announced their annual video Music Awards nominees this morning, the man The Los Angeles Times called “The People’s Superstar” was among the most-nominated with four: Video and Male Video of the Year for “American Kids,” Collaborative Video for “Wild Child,” featuring Grace Potter, and CMT Performance Video for “American Kids” from the inaugural “CMT Instant Jam.”

“I think people get a sense of who you are from video,” Chesney says of his commitment to the form. “If you do it right, really push away from what’s expected and try to reflect who you are – it deepens what’s on the records. I know for this record, especially, I really wanted to expand what we think of when we think of country music right now.”The psychedelic bus/ragtag youth adventure of “American Kids” celebrated the freewheeling euphoria that is coming of age, but also the spirit of anyone who refuses to buy in to the way things are one. “There were three rhythms, two hooks and no song out there like it, so I wanted a video that broke down expectations of who’s listening to the music… and how anyone can feel so alive in songs!”
“Wild Child” showed musician Gretchen Rhodes, a Chesney friend from the Caribbean, hiking, paddle-boarding, riding, meditating near her Hawaiian home. “I wanted to show a woman who was strong and individual, not a cliché and way more soulful. This is a song about any woman so hungry to engage life, she spends her days trying to taste it all… You don’t have to be a gypsy to be a free spirit, but just someone so in love with life, you will never get enough. That’s something I wanted to show…”
Working with longtime director Shaun Silva, they definitely rewrote the notion of what country is – and captured the essence of each song. In addition, a clip of “American Kids” from the inaugural “CMT Instant Jam” at Athens, Georgia’s legendary Georgia Theater was given the nod for CMT Performance of the Year.“When they came to us with the idea, I loved it,” says Chesney. “It picks up what we’ve been doing with Keg In A Closet for years: college town, pack’em in, throw out the set-list! When I saw their clip for ‘American Kids,’ I smiled because they got  it!”As “Wild Child” crests the Top 5 and the Grammy-nominated multiple-week #1 “American Kids” both being recognized, Chesney remains at a creative peak. The Big Revival marked a creative rebirth for the East Tennessean. Rolling Stone wrote that the album “continuously brings a sense of musical and emotional urgency… His strongest since 2010’s career-defining Hemingway’s Whiskey,” while USA Today called The Big Revival “a coming-of-age tale full of life-changing memories” and New York Newsday proclaimed, “he really builds his vision of America… a big-tent collection of future hits that celebrates regular folks who stand up for each other. In turn, even more folks will stand with Chesney after hearing it.”

With The Big Revival Tour 2015 on the road through the end of August, there is much music to come from the man who just lodged his 26th No. 1 with “’Til It’s Gone.” And on Wednesday, June 10, tune in… Kenny Chesney will be in the house.